See what you missed out on for the non-season of 2020-21. Where to ski, how to ski in Megeve with no ski lifts but fantastic snow! 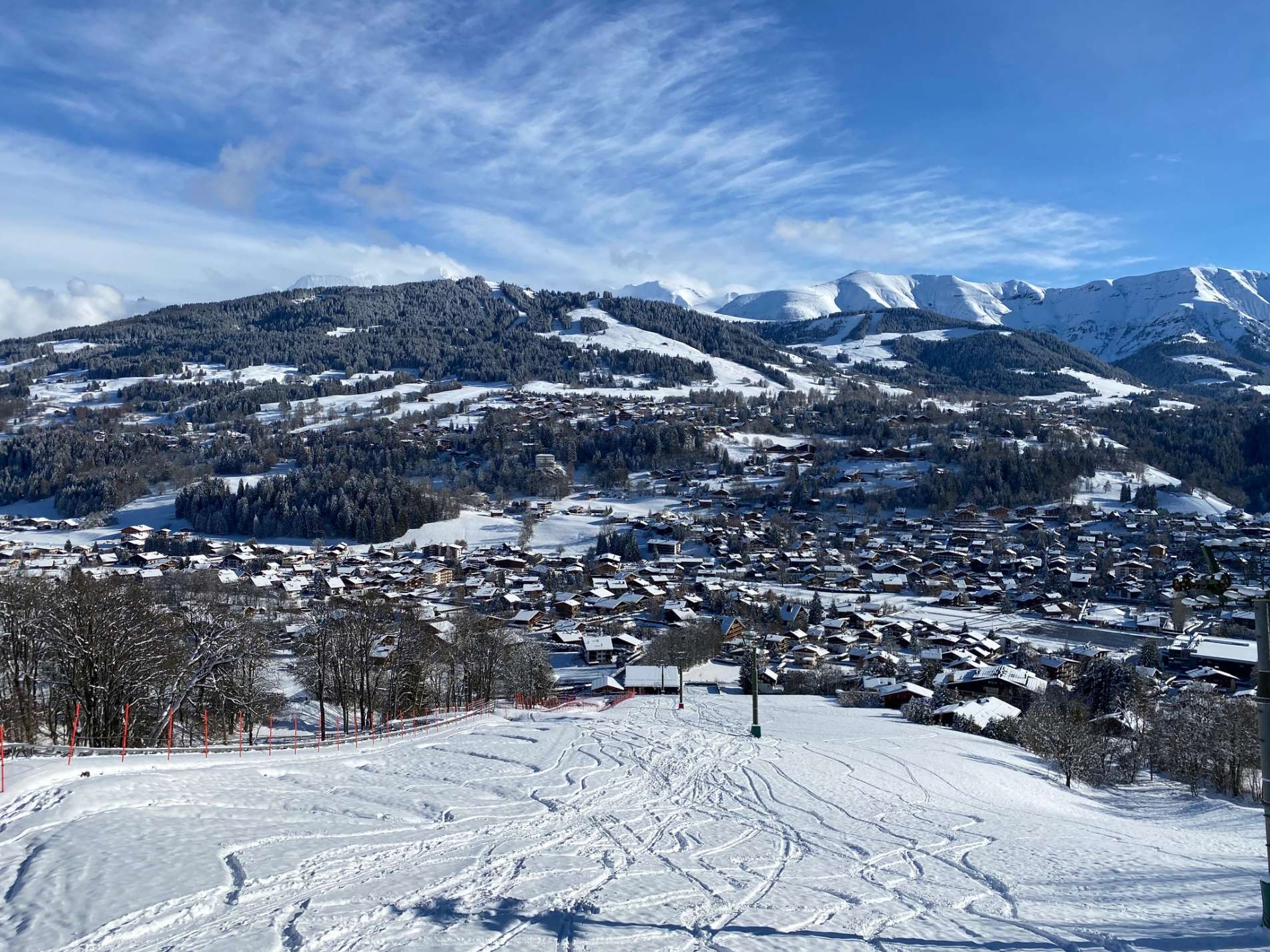 As much as the winter season was a let down from a travel perspective, it more than made up for it through the quality and quantity of the snow that was delivered in Megeve.  If you were prepared to work for it then there was some fantastic skiing to be had and the pistes of Megeve were unsurpisingly deserted!

Early December provided the first covering and by the 6th those with touring skis were out having fun.  There was enough for a decent covering and more forecast.  It was fantastic to see the base being set down even though we didn't know what we should be expecting from the up coming season.  Looking over from the Caboche towards the Jaillet ski area was just magnificent with the fresh, white covering over the whole of Megeve. 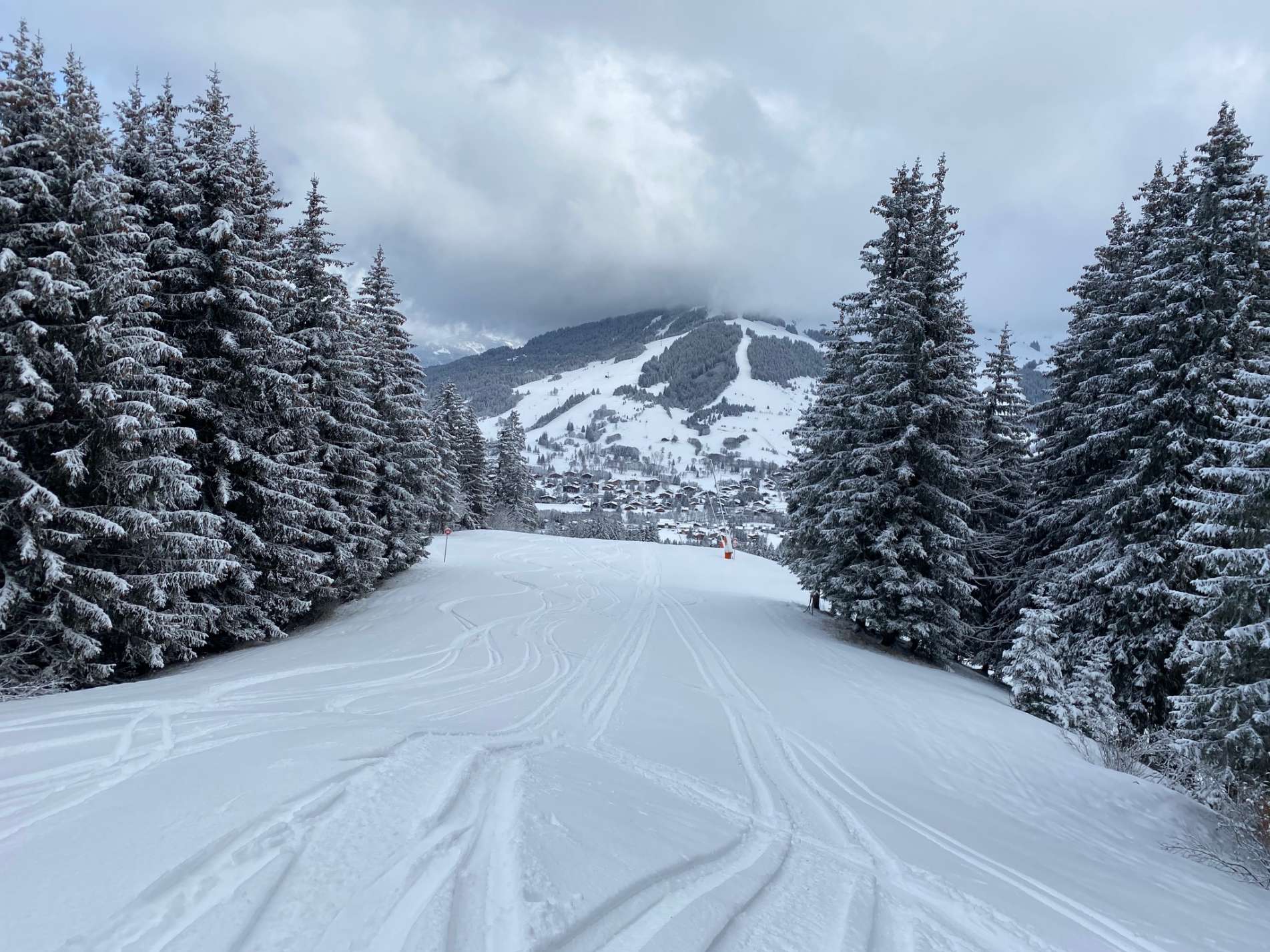 By the Christmas holidays, the scene was set, the snow was here for the duration.  The picturesque town of Megeve was still pretty quiet and we were looking forward to a white Christmas.  A Christmas Day randonee (french for ski touring) was a great option this year.  Powder on powder!  None of the pistes had been sign posted so it was a case of making your own tracks down.  Just amazing! 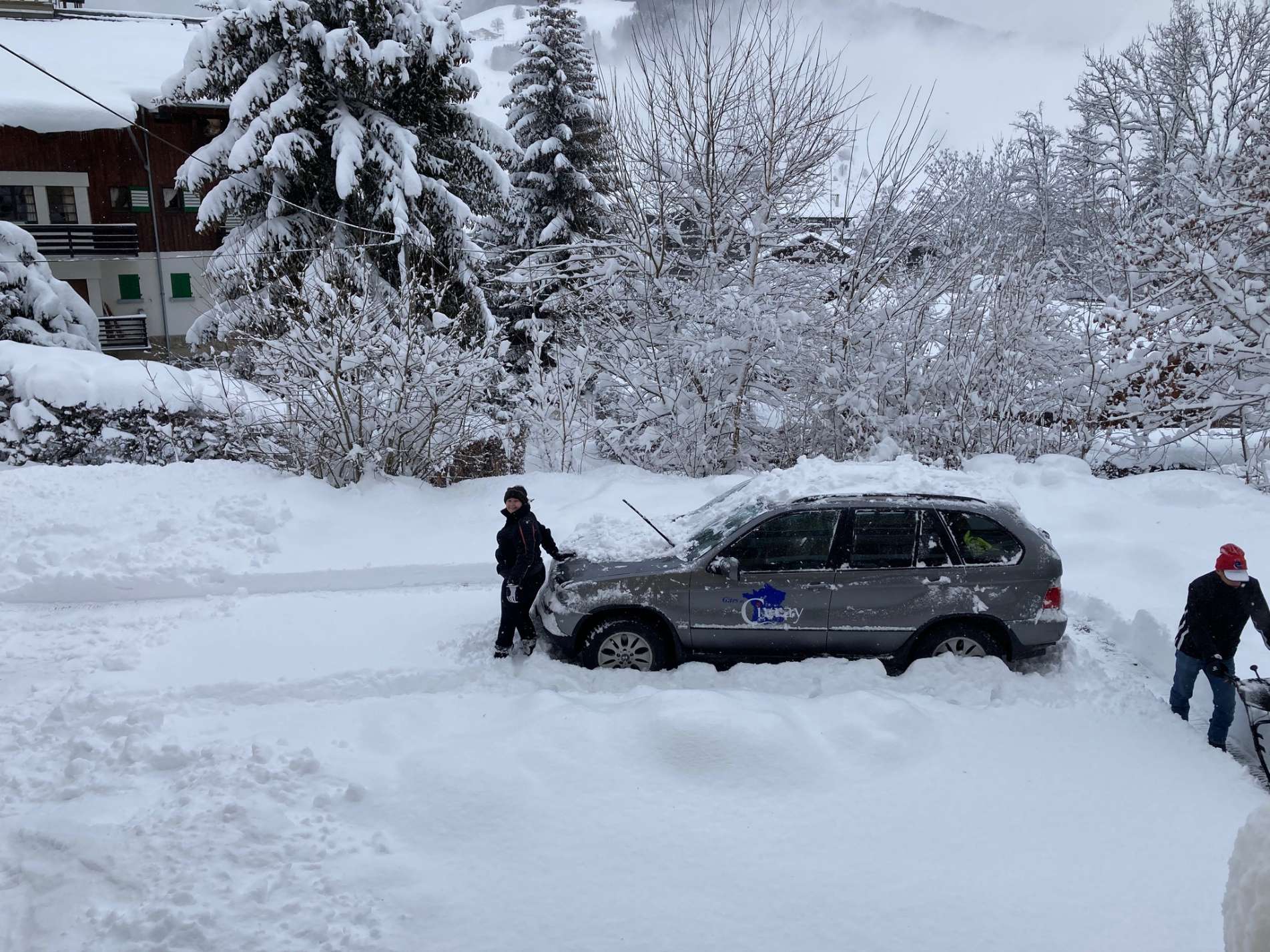 Come the New Year, come the new snow fall and it was time to once again dig out the car.  You can always tell when it's going to be a great powder day as the snow blower doesn't clog up so easily - first world problem ;)  We had over a metre of snow through the Christmas and New Year week so what could we do but explore the pistes of Megeve.  Love my ski touring! 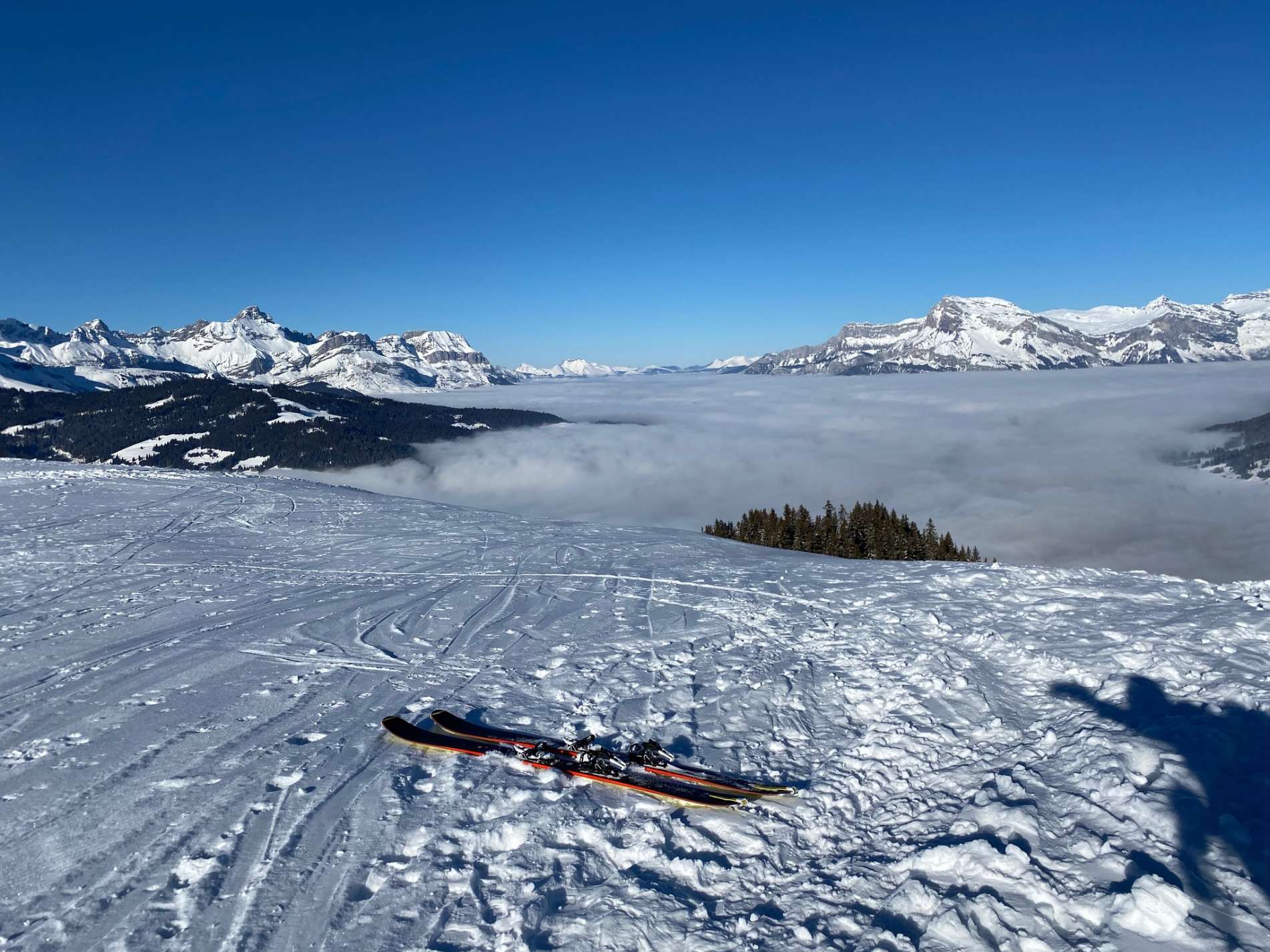 Through January the temperatures dropped and the blue skies arrived giving some of the most perfect skiing conditions in Megeve.  Walking up to the top of the Rochebrune gave this amazing view across the Sallanches valley and the cold temperatures kept the snow light and powdery.

The walk up the mountain certainly made you appreciate the ride back down and of course frequent stops to admire the view were an absolute necessity! 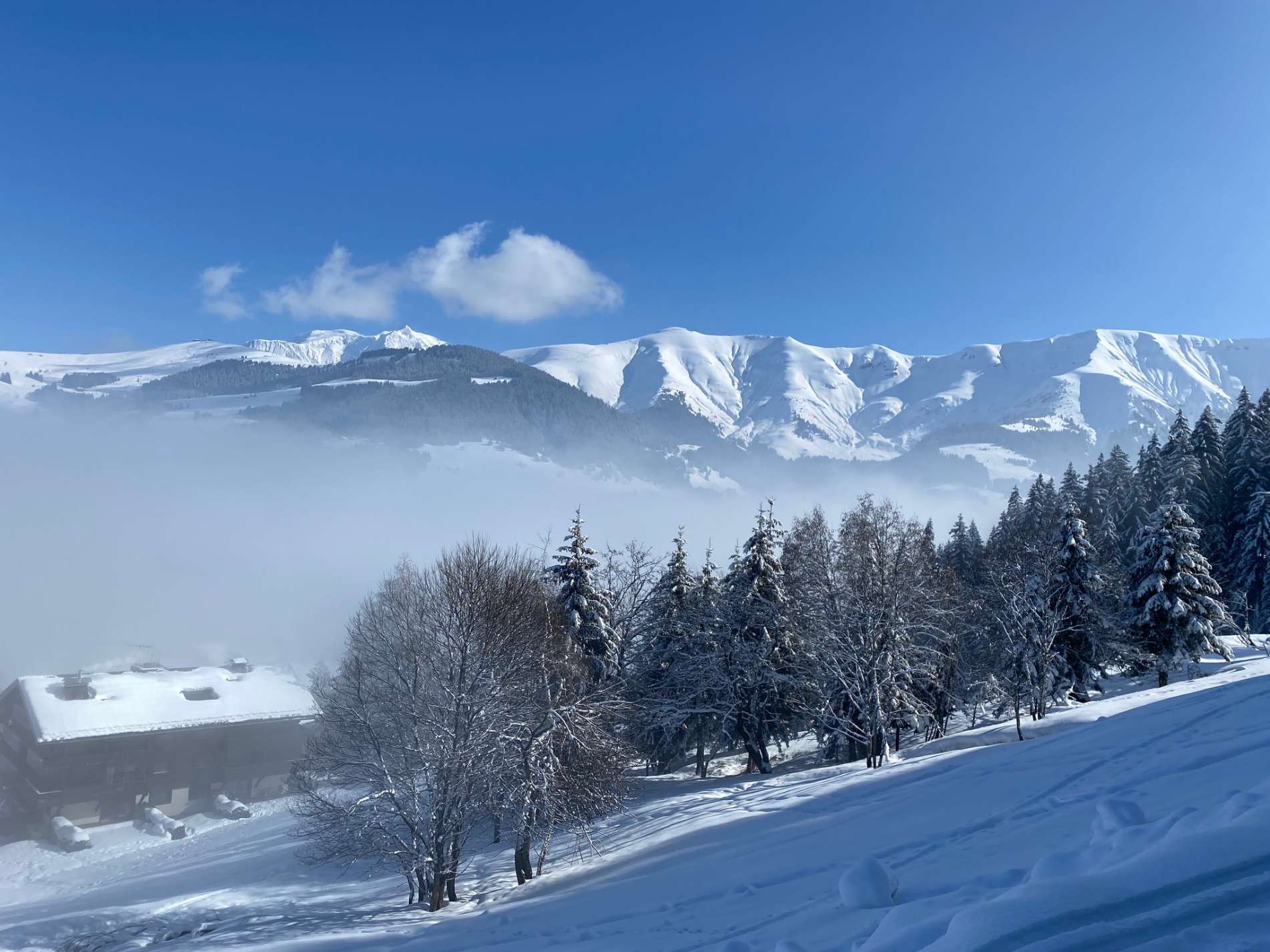 The temperatures rose towards the end of Jan/early Feb but even though the snow hadn't been packed down and maintained, as on normal seasons, there was still plenty to ski on.  Snow returned for the French half term holidays in Feb giving fantastic conditions.  It was just so easy to do similar routes as every time it looked different.  This is the way up from the Caboche walking up the green piste.  Going up hill gives you time to look around and actually take in the fabulous views of Mont Blanc, Cote 2000 and beyond.  It was truly amazing. 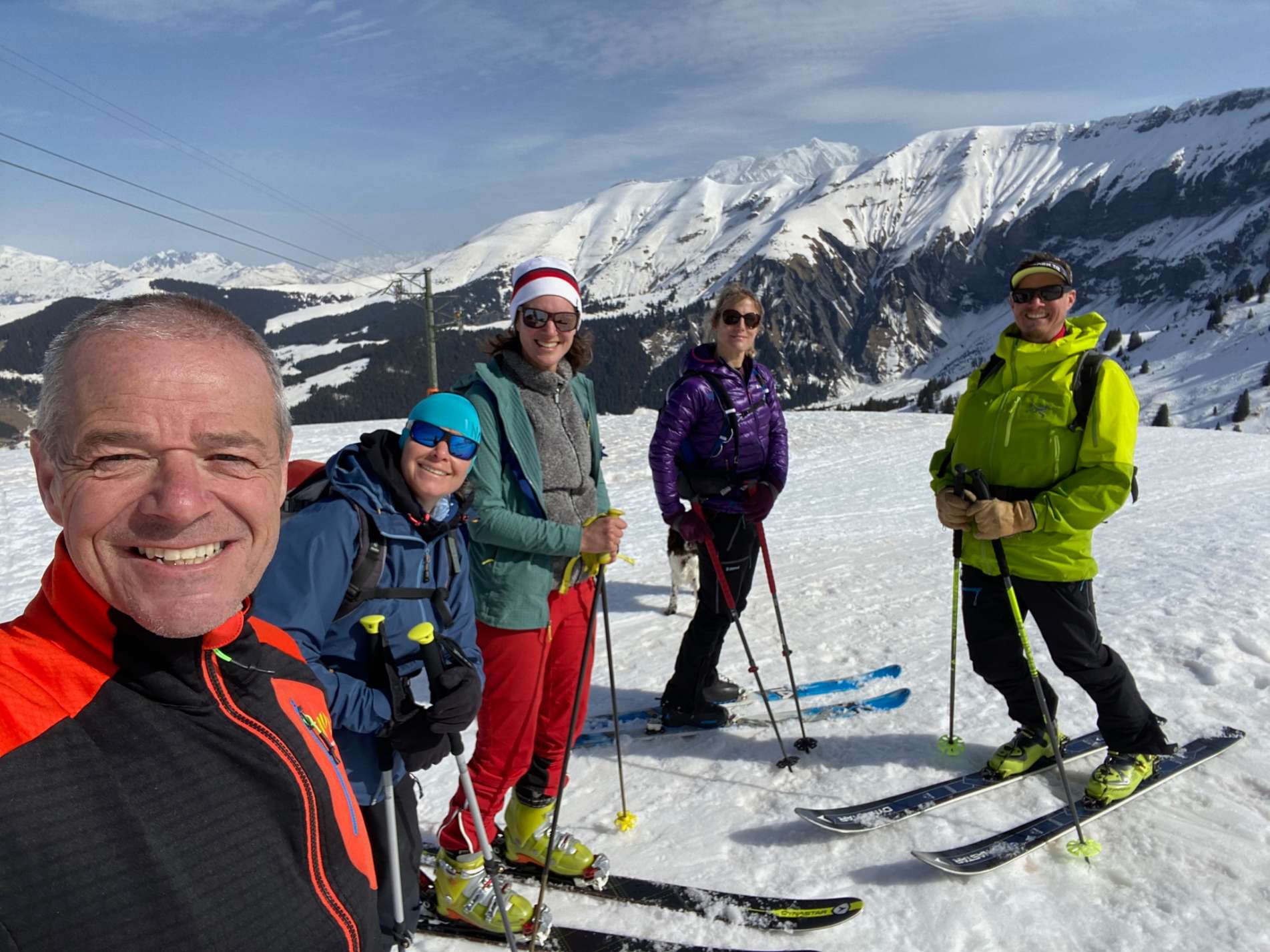 What was great was that the people who tried ski randonee or ski touring and like it were getting pretty fit.  I fout it a fantastic way to build fitness as you are not only walking up hill but also carrying food and drink, helmet, change of clothes, safety kit etc. as well as having an extra few kilos on each foot.  By the end of February, we had formed a small group of Megeve pals and met up on a Friday to get out and explore.  We ranged from brewers of beer to pompiers (firemen), fitness and ski instructors to french teachers.  I loved my Friday ski tours in Megeve! 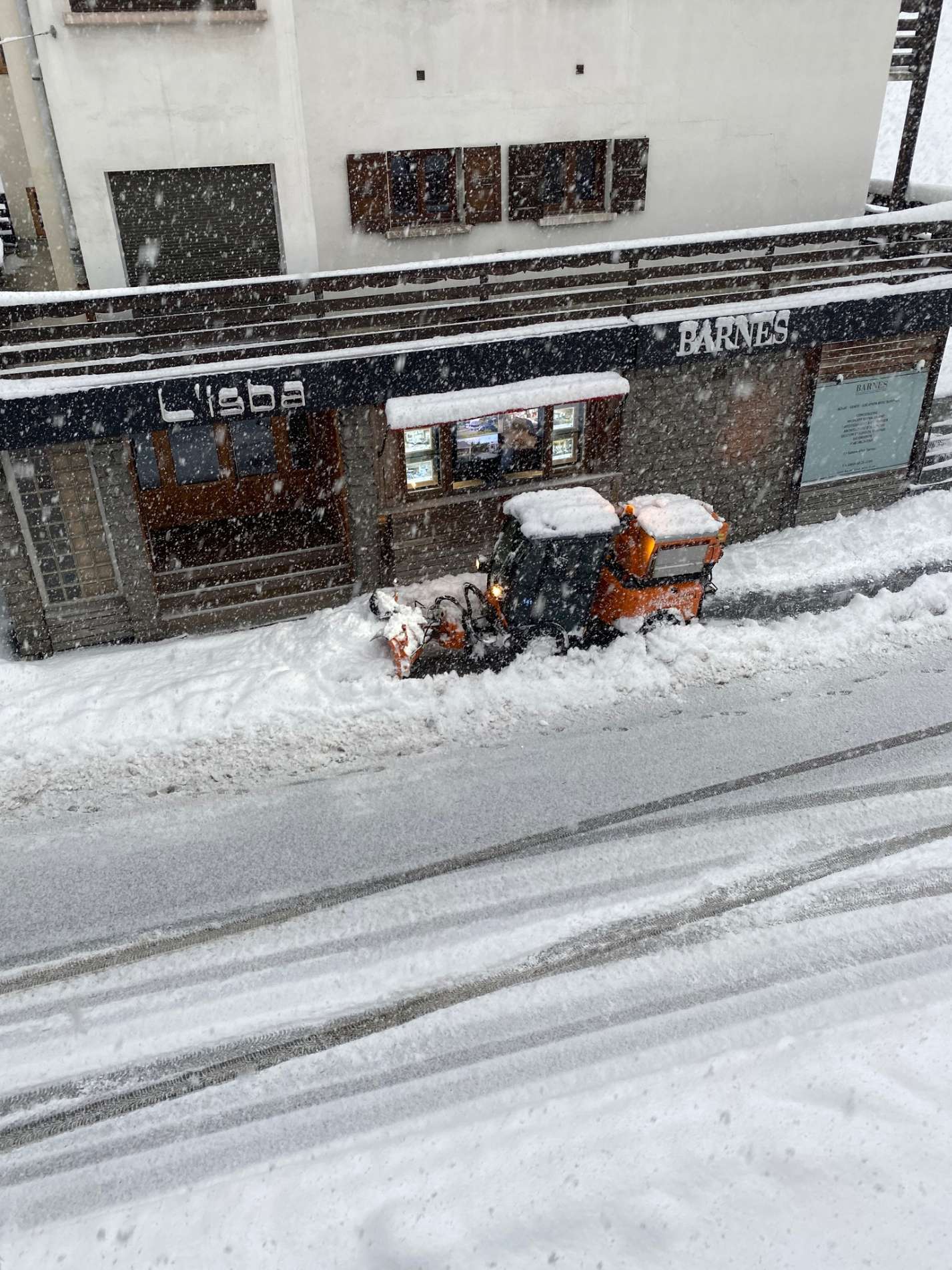 The snow ebbed and flowed.  Some weeks there were thoughts that this could be it for the season.  After all, there's no time for anymore snow and then you get to mid March.  It just started snowing and it didn't stop!  More snow means more shovelling.  Our Chalet Hotel Rond Point in Megeve looked fantastic in the fresh snow and it was powder so light and easy to clear.  Well it would have been if it had stopped snowing for long enough to get it clear!  As with all ski resorts, Megeve is just so prepared for the whether, it's never a drama.  I particularly liked their pavement snow plough! 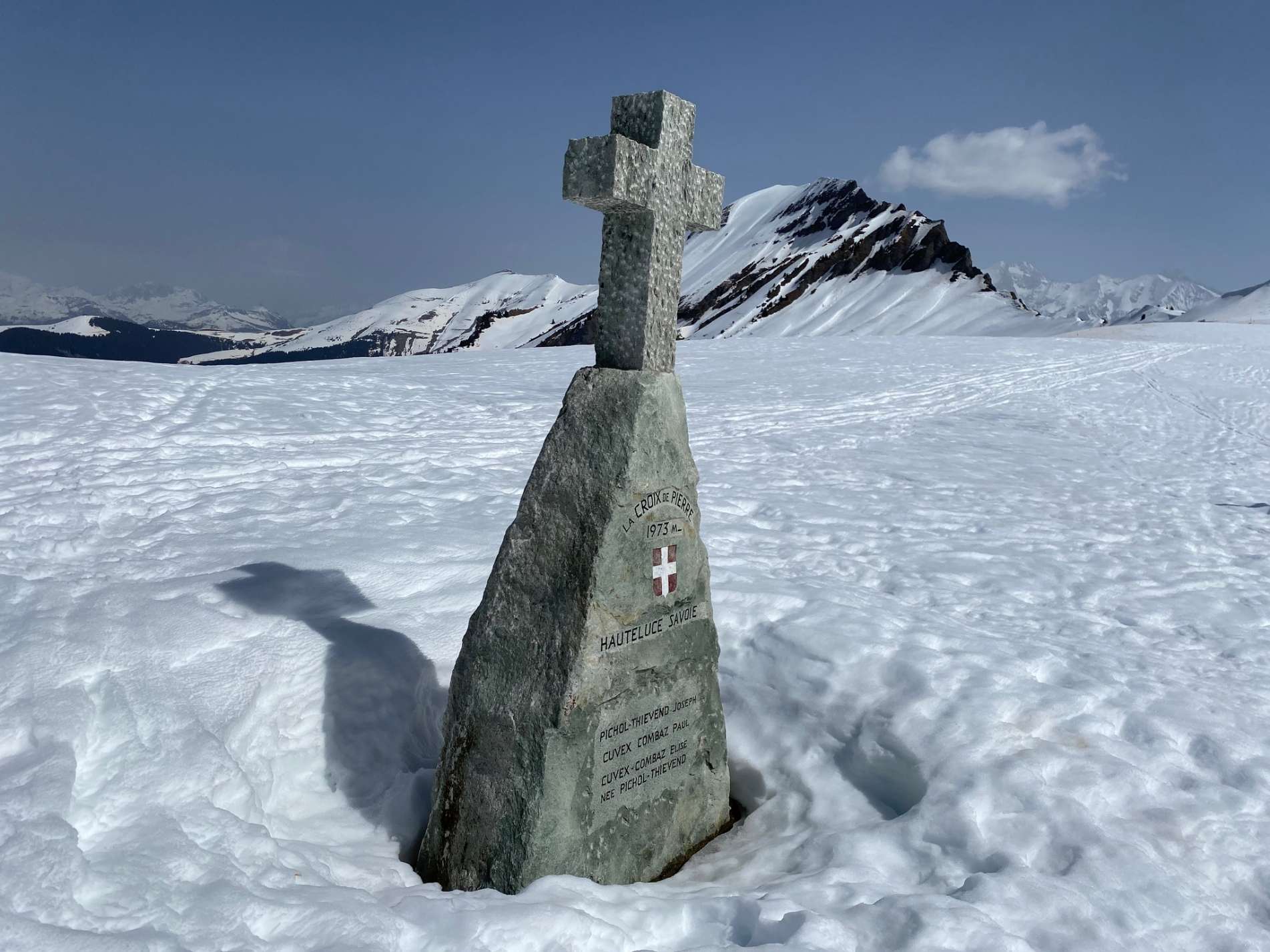 The end of the weirdest ski season ever was approaching but the snow hadn't melted.  Even by the end of the season, without the slopes being maintained you were able to go from the beginner slopes of Rochebrune all the way up.  The first Friday in April we decided to do a bit of a longer route.  Leaving Rochebrune behind us and wearing just base layers we headed up past the Caboche, up the Olympique and into the trees emerging at the Alpette.  From there we walked across the ridge and instead of dropping left to Cote 2000 we turned right and went across what I have always known as the moonscape an amazing, rolling view that you get from the top of Lanchettes (NB you do have to be very careful as there are avalanche chutes here).  The snow up the top was a bit heavier than previous excursions but it was still very pleasant.  We crossed the moonscape and climbed up to Col de Very, the perfect lunch spot at just under 2000m.  From here we dropped off the top, picking the line from higher up to avoid the areas that were in continual shade or sun and hiting the sweet spot with some really soft snow that allowed smooth and relaxed turns down to the Varins and finally finishing the run at the Leutaz car park.  Fantastic!

This season, without the lifts, has put a whole new perspective on skiing that made me look at it in a completely different way.  Instead of just hopping on a lift and bombing down the mountain then repeat, it became much more of a throw back to how life used to be before automation and gadgets did everything for you.  A time when you had to work hard to earn the rewards.

From the snow perspective, this was an amazing season.  The powder just seemed to keep coming.  I really felt for all the skiers who couldn't make it out but there's always next season and we're ready and raring to go.  We've got catered chalets and chalet/hotels as well as self-catered apartments for ski weekends and longer week long ski holidays.  Megeve is as beautiful as ever and the snow will be waiting for you - you won't even have to walk up hill to get to it ;)

Amazing snow & great offers for the start of the season
Fantastic early season snowfall has given us a great base in Megeve. A wonderful time to grab a last minute bargain out to the slopes! Read more
What do you look for on a ski holiday to France? Megeve is the resort for you!
If it's space, empty pistes and no lift queues then you can't beat skiing in Megeve! Read more
Megeve snow report 2020-21
See what you missed out on for the non-season of 2020-21. Where to ski, how to ski in Megeve with no ski lifts but fantastic snow! Read more
Introducing our new resort managers in Megeve - Jenny & Steve
Jenny & Steve, our new resort managers in Megeve look forward to welcoming our guests and are excited by the first snowfall of the season Read more