Winter has returned to Megeve

Winter has returned to Megeve snowing most days in the past week. 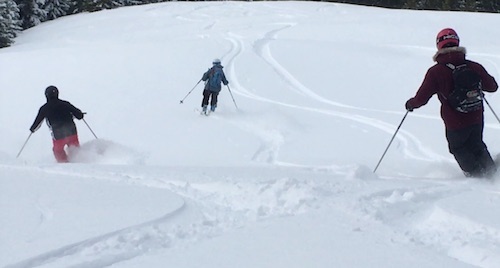 It started snowing after lunch

After 3 weeks of warm weather, winter has returned and its been snowing on and off for most of the past week. Cold - back to long johns and heated gloves.  Hard to believe there's only 4 1/2 weeks left of the season.  We had a break in the snow a couple of days ago and had a morning's sunshine so above is a pic of Kathryn making fresh tracks below the Ideal restaurant in Megeve.

That was a couple of days ago.  Since then it hasnt really stopped snowing  There's nobody out skiing - pistes are deserted.  The Parisians have gone home after their holidays so you ski straight on to all lifts.  Today we skiied off piste all morning fresh tracks all the time.  Here is a youtube clip.  Neal's first day off-piste!

So today we were up bright and early and at the bus stop for the 8.40 bus.  But no bus.  They have changed the bus time table as the French holidays are now over.  But we got to Mont d'Arbois soon after the first lift.  And then we skied down to the Mont Joux chair which was late opening because of the fresh snow so we went up the Freddy drag and put in some fresh tracks there. They immediately opened the Mont Joux chair so it had been skied a bit but we came down under it because Epaule had not yet opened.  Anyway we then did have success on the Epaule.  We were on the second chair and first down the off-piste under the lift.  As we went up again Ali and Matt and children were skiing down so we joined them and then skied over the back in deep powder to the Porcherry.  Seb said he had a spectacular wipe out but no-one, other than his Dad, saw it.  The rules of wipe outs are that they must be in front of everyone.

Last chance to book at last season's prices!
Flights are out and are cheap, quarantine is over and we are open so grab a great deal! Read more
Last Gasp - end of season
The lifts were closed and Megeve was in lockdown from midday, so John & K, co-owners of Stanford skinned up from Cote 2000 and skiied back to Rochebrune. Read more
Lots of snow
Lots of new snow in Megeve and the crowds have gone. Read more
Perfect Pistes in Megeve
Despite poor snowfalls in the Alps the Megeve pistes have been good all season and the recent dump gave us a great off piste day with Stanford Skiing staff. Read more